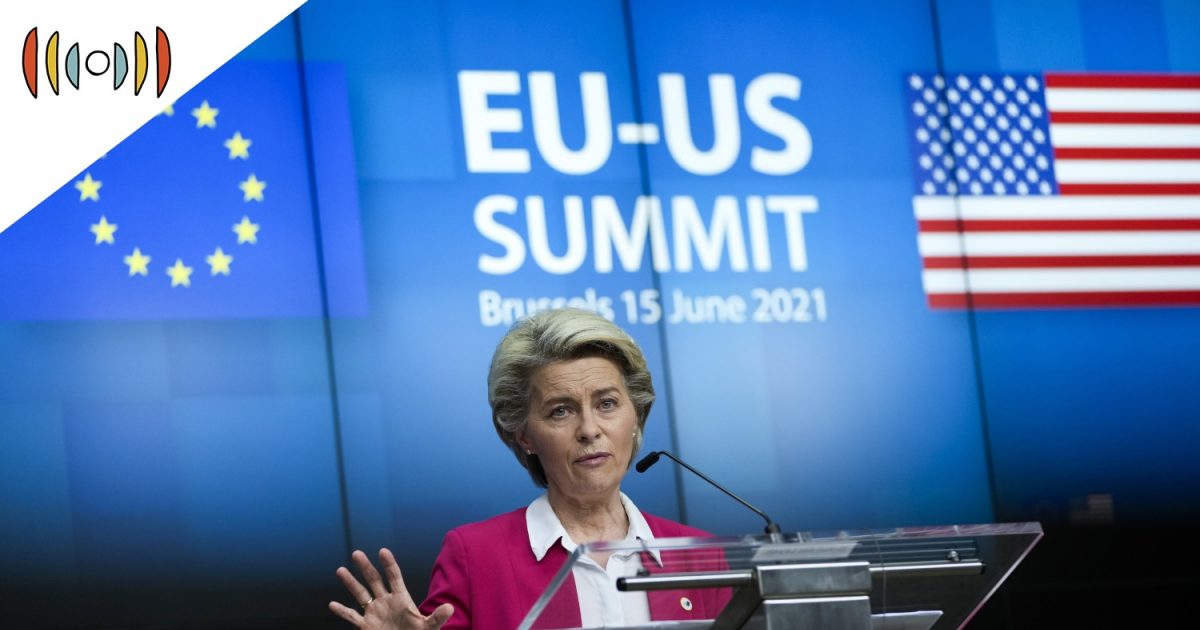 Biden set to meet with Putin Geneva today » Reporters fired questions at President Biden in Geneva shortly after his arrival ahead of today’s face-to-face meeting with Vladimir Putin.

Biden has called the Russian president a “worthy adversary” and has said he hopes to find areas of cooperation with Putin. But he’s also warned that if Russia continues its cyberattacks and other aggressive acts towards the United States—quote—“we will respond in kind.”

Back in Washington, the president has backing from both sides of the aisle to stand up to Moscow. Republican Congressman Michael McCaul…

MCCAUL: I think he should say no more. We’re not going to take this anymore. We are going to respond. There will be consequences, and we are going to hit you back.

This will be Biden’s first meeting with Putin as commander in chief.

U.S., E.U. agree to end trade dispute on aircraft subsidies » President Biden this week has held long days of meetings with heads of state at the G-7, NATO and U.S.-E.U. summits.

And on Tuesday, Biden and European officials announced a breakthrough in a long and bitter trade dispute. The two sides will end a 17-year rift over the aircraft subsidies for U.S.-based Boeing and France-based Airbus.

LEYEN: The agreement we have filed now really opens a new chapter in our relationship, because we move from litigation to cooperation on aircraft, and that after almost 20 years of dispute.

The deal is expected to lift billions of dollars in punitive tariffs.

The U.S. imposed $7.5 billion in tariffs on European exports in 2019 after the World Trade Organization ruled that the EU had not complied with its rulings on subsidies for Airbus.

The EU retaliated last November with $4 billion in punitive duties after the WTO ruled that the U.S. had provided illegal subsidies to Boeing.

The Airbus-Boeing ordeal was the longest-running dispute in the history of the World Trade Organization.

The National Security Council on Tuesday unveiled a new strategy to counter domestic threats. It includes the sharing of intelligence within law enforcement agencies and working with tech companies to eliminate certain content online.

GARLAND: Our experience on the ground confirms this. The number of open FBI domestic terrorism investigations this year has increased significantly.

A report from the Office of the Director of National Intelligence stated that white supremacist groups and anti-government militias pose the highest risk.

Garland said the president’s budget request for the next fiscal year will seek $100 million in funding for the Justice Department to counter domestic extremist threats.

COVID deaths hit 600k as new cases continue to fall » The United States passed a grim milestone on Tuesday. Officially, the U.S. death toll from COVID-19 has surpassed 600,000. However, two other numbers are cause for encouragement.

The United States just saw its first day with new infections below 10,000 since March of 2020. And daily pandemic-related deaths have dropped to around 340. That too is a figure not seen since March of last year, just days after COVID-19 was first declared a pandemic.

The daily death toll is now just one-tenth of the level seen at its January peak of more than 3,000.

KRISTEN FLAVIN, REPORTER: Pastor Tim Stephens of Calgary’s Fairview Baptist Church is behind bars, awaiting a June 28th hearing. Police arrested him on Monday and charged him with violating a court order.

Alberta Health Services says authorities served Pastor Stephens with a court order prior to Sunday services. Officials say he acknowledged the order but went forward anyway with an outdoor service in violation of COVID-19 regulations.

Jay Cameron, a lawyer with the Justice Centre for Constitutional Freedom, told CBC News—quote—”We will challenge his arrest and defend against the new ‘health’ charge.”

I’m Kent Covington. For more news, features, and analysis, visit us at wng.org.

WORLD Radio transcripts are created on a rush deadline. This text may not be in its final form and may be updated or revised in the future. Accuracy and availability may vary. The authoritative record of WORLD Radio programming is the audio record.