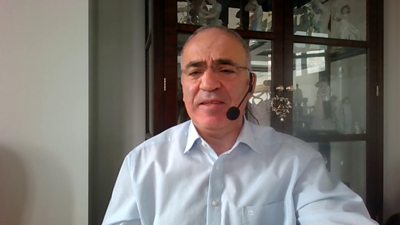 Long-time democracy campaigner and Russian chess grandmaster Garry Kasparov has said he is very concerned for the health of Alexei Navalny who is three weeks into a prison hunger strike.

He told BBC World News: “We understand that the West cannot save Navalny, but it can seal his fate by simply ignoring him.”

It was better to defend dissidents than to mourn martyrs, he said.

Supporters of Mr Navalny are warning that his life “hangs by a thread” since blood test results appeared to show that his potassium levels were dangerously high.

The Kremlin has dismissed international statements of concern about Mr Navalny as “unacceptable”.