Sports Meant So Much to Me. Why Wouldn’t My Son Play? – The New York Times

Sports Meant So Much to Me. Why Wouldn’t My… 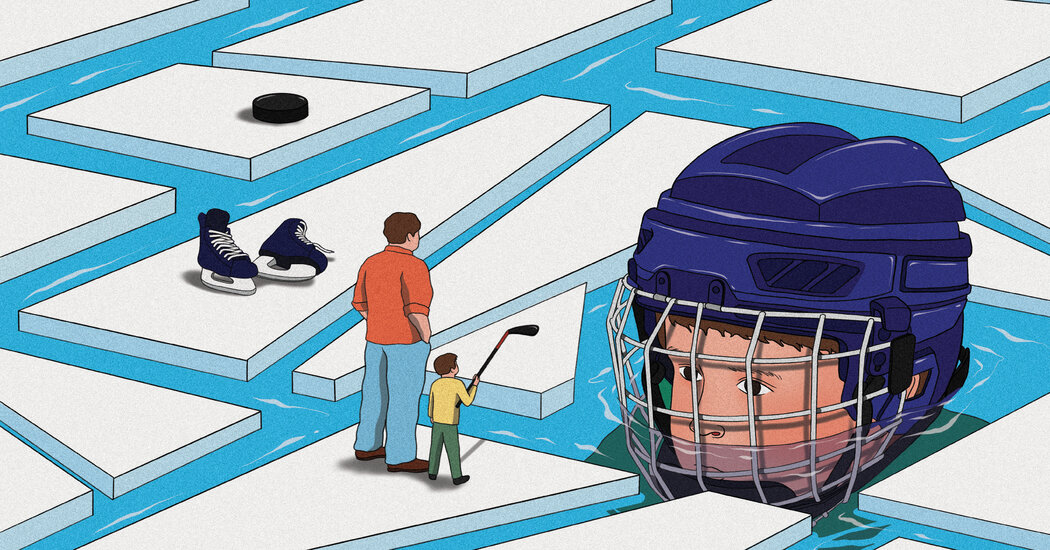 The next thing to learn is that you skate on your edges, shifting from the inside to the outside and back depending on what you need to do. You can begin to learn this by lifting up your skates and putting them back down again while standing still. At the rink in Queens or on my father’s pond and even a couple of times on the tiny koi pond in our community garden, which froze nicely when it was cold out, Raffi and I stood across from each other and raised our hands like lions and stomped back and forth from foot to foot, roaring at each other. That was our edge work. Once in a while he fell and, in textbook fashion, got up again.

But beyond that it got too complicated. Beyond that you had to start moving. Ideally you would angle your feet out a tiny bit and push off the inside edge, first from one skate, then the other. This is easier said than done. I would try to explain it, and Raffi would grow frustrated. I would try to show him, by doing it, but he didn’t like that either. Inevitably he would end up in tears — from anger at his slow progress or because he’d fallen and hurt himself or maybe just because he was cold. Sometimes, especially at the rink in Queens, he would lie down on the ice and start eating snow. “That’s disgusting,” I would say, because people are always spitting and blowing their noses onto the ice, but that would only make him want to do it more. At that point I would feel that I had reached the end of my pedagogical potential when it came to Raffi and ice hockey.

How did others do it? My own father was an amateur boxer in Moscow and stayed in shape well into middle age, but he never pressured me to play sports or sent me to the yard to improve my game. He must have signed me up for all the teams and he drove me to all the games, but later, when I was in college and spending 30 hours a week on the football team lifting weights and practicing and watching film — all for a sport that I was too small and too slow and too untalented to play at the college level — my father was the one who persuaded me to stop. I told him that I was thinking about quitting, that I was finding it difficult to play football and keep up with my classes, but also that I had a notion, a hypertrophied version of Coach Kojoyian’s old notion, about how the virtues of manly combat were central to one’s education. My father rejected this. “You know,” he said, “after the war, a lot of the men who came back, who had been very physically brave in the fight against the Germans, proved to be total moral cowards in the face of political pressure” — from Stalinism. My father, who had punched out anti-Semites on the streets of Moscow, thought that moral courage, which could not be cultivated on a football field, was much more important than physical courage, which arguably could. A few weeks later, I went into the coach’s office and quit.

Of course, there are other kinds of fathers and more talented sons.

In the world of hockey, by far the most famous father is Walter Gretzky, who died earlier this month at age 82. As a youth in Ontario, Walter was a promising hockey player, but he was too small and skinny to make the leap to the pros. After high school he went to work for Bell Canada, setting up phone lines. He married young. In 1961, when he was 22, he and his wife Phyllis had their first child, Wayne.

The story of Wayne Gretzky’s youthful exploits has been told many times. Walter put him on skates when he was 2. Wayne seemed to love it. On Saturday nights, the family would go over to Walter’s parents’ farm and watch “Hockey Night in Canada.” Between periods, little Wayne liked to grab a small stick and practice shooting on his grandmother. The winter Wayne turned 4, Walter built a rink for him in the backyard. At 6, Wayne tried out for the youngest local hockey team — for 10-year-olds. Wayne made the team. In that first season, as a 6-year-old, he scored just one goal. Four years later, as a 10-year-old, he scored 378. Eventually he would break every scoring record imaginable.

In Canada, Walter, or “Wally,” is almost as much a celebrity as Wayne. After all, you couldn’t up and become Wayne Gretzky. But you could become Walter Gretzky — that is, a man who encourages the talent of your progeny, who tends to it, who does enough to push it along without destroying it. And the question becomes: Just how much did Walter push Wayne?

Here, the narratives become contradictory. Wayne, in his autobiography, says that he was hockey-mad from a young age, that he wouldn’t stop skating and that ultimately Walter had no choice but to build a rink in the backyard. But Walter, in his autobiography, admits that he bought their house, not long after Wayne was born, specifically because it had a flat yard that he could someday build a rink on. There was a push and pull, clearly — a driven father, a preternaturally gifted child — and it’s impossible at this distance to know which of them predominated.