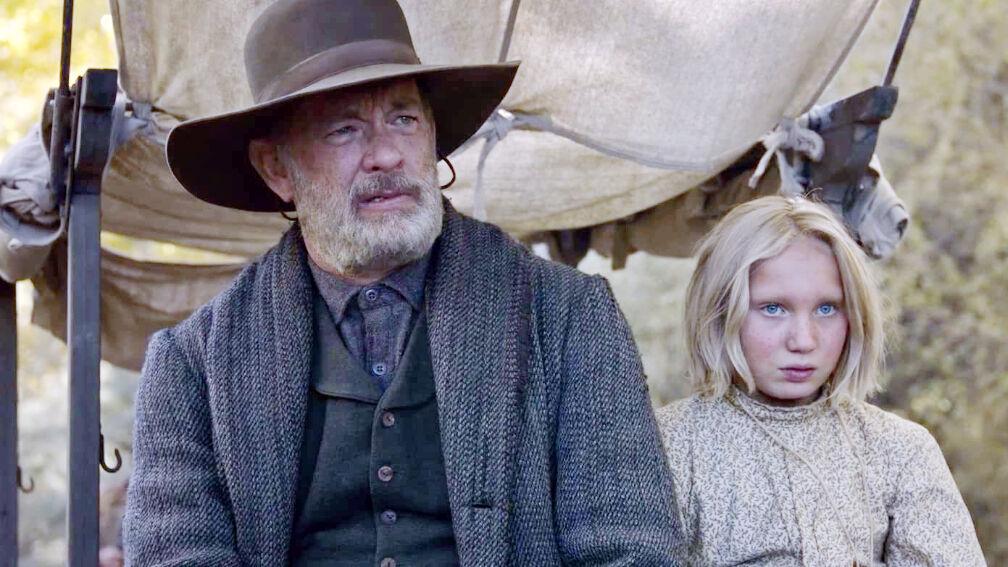 A western about a weathered former Civil War soldier tasked with returning a child across hostile lands to be with her family sounds like an old Clint Eastwood or even a John Wayne movie. But, that was then. In the now, “News of the World” stars Tom Hanks as the soldier, a man named Captain Jefferson Kyle Kidd, and the director is Paul Greengrass, not John Ford.
While the tropes may seem familiar, Greengrass provides a more contemplative look at the unfolding drama, giving the audience a look at the west beyond mere good guys and bad guys. Here, there are questions of morality and ethics at play as Kidd winds his way through a strange adventure in which he recognizes the choices fate presents and how and why he decides what to choose. At the center of these choices is a little girl named Johanna, played with a startling depth of talent by German actress Helena Zengel.
Even with a big star on the screen, it’s hard not to look away from Zengel’s wise-beyond-her-years features. She projects a depth of character that fully embodies the person she is portraying, complete with all the subtleties, maturity and grace one might find in a much older actor. Her Johanna isn’t an old west kid being played by a modern girl. She is who she is onscreen. Zengel will, I predict, become a big star.
How they meet is, again, part of fate.
Kidd makes his living as a news reader. He travels the west collecting the latest newspapers and when he lands in a new town he arranges to have a space where, for a dime donation, he reads to a rapt audience the latest news from the United States and abroad. The setting is 1870, a mere five years or so after the Civil War, a time when sentiments between the north and south have not cooled in any shape or form.  So, he tends to be careful to render the news in a way that informs but doesn’t rile. Eerily, there are hints of issues facing Americans today.
One day while traveling, he comes across a wrecked wagon and the body of a Black man hanging from a tree. A note pinned to him offers a racist declaration about who is allowed in Texas and who isn’t. That’s when he notices a kid hiding in the bushes nearby. It is Johanna and from what little he can glean from papers in the wagon he discovers she was orphaned while a baby and raised by a Kiowa band of Natives. She speaks only Indian. In subtitles, we learn her Kiowa name is Cicada.
Kidd decides his only course is to take her to a military outpost where he can leave her with the Indian Agent, but fate again intervenes and he decides to take her to her family. What follows is a long and perilous journey, during which they develop respect for each other. Kidd also comes to grips with the fate of his own family as well.
Greengrass uses the New Mexico landscape as an eternal vision of the west, a place where conflict, lust, greed, morality, honor, and insanity fight a never ending battle with Lincoln’s better angels. There have been larger battles Kidd has fought and through his news readings is knowledgable about those still tearing the world apart. But, all of that doesn’t matter. He has one thing he must do and it must be done well.
This film has been nominated for several Academy Awards.
“News of the World” is rated PG-13 for violence, disturbing images, thematic material and some language.
This film is now showing at the Storyteller Cinema 7, 110 Old Talpa Cañon Road in Taos. For showtimes, tickets and additional information, call (575) 751-4245 or visit storyteller7.com. This film is also streaming for rent or sale through major online venues.
Tempo grade: A+.
Also showing at the Storyteller Cinema 7
Directed by Ilya Naishuller and starring Bob Odenkirk and Connie Nielsen in an action thriller with comedic overtones. Rated R for strong violence and bloody images, language throughout and brief drug use.
Directed by Don Hall, Carlos López Estrada and two co-directors, this Disney animated film, featuring the voice talents of Kelly Marie Tra, Awkwafina, and Gemma Chan, is set in the re-imagined Earth world known as Kumandra where a warrior named Raya is determined to find the last dragon. Rated PG for some violence, action and thematic elements.
Directed by Doug Liman and starring Tom Holland and Daisey Ridley, this film is set in a dystopian world where there are no women and all living creatures can hear each other’s thoughts. Rated PG-13 for violence and language.
This animated film directed by Tim Story and featuring the voice talents of Chlöe Grace Moretz, Michael Peña and Colin Jost, is based upon the classic Hanna-Barbera kids cartoon but this time with some modern elements. Rated PG for cartoon violence, rude humor and brief language.
Directed by John Lee Hancock, this film starring Denzel Washington, is about a deputy sheriff sent to Los Angeles on a routine assignment but who becomes inbroiled in a search for a serial killer. Rated R for violent/disturbing images, language and full nudity.
• The Croods: A New Age
This animated kids film directed by Joel Crawford, featuring the voices of Nicolas Cage, Emma Stone and Ryan Reynolds, follows a family of prehistoric humans as they stumble into the great unknown. Rated PG for peril, action and rude humor.
Now streaming at the TCA’s Big Screen @ Home film series
Truth or Consequences
Documentary
Ticket $10, available now through April 4.
TCA Big Screen @ Home series
This is billed as a “speculative documentary” by Hannah Jayanti about time and how we weave
the past into the present and our possible future.

Set in the small desert town of Truth or Consequences, New Mexico, the film takes place in the shadow of the world’s first commercial Spaceport. Subtly set in a near future when space travel has begun, the film follows five residents in the town.

Anchored in observational documentary footage filmed over three years, the film weaves together archival footage, experimental virtual reality worlds, an improvised score by Bill Frisell and a speculative premise based on current events – a launch site for commercial space travel outside of town. These intertwine to create a lyrical meditation on progress, history, and how we navigate a sense of loss within ourselves and a changing world.

How to watch TCA Big Screen @ Home films: Visit tcataos.org/film/ to find selections available. Click on the movie link and follow instructions for ticket payment and other features such as filmmaker interviews and free online discussions presented by the TCA Film Fans. Watch on your computer or other media device. The Taos Center for the Arts retains 50 percent of the ticket price.
EDITOR’S NOTE: The Taos Community Auditorium is closed for the time being in response to the COVID-19 coronavirus pandemic. Until it reopens we will focus on movies through the TCA’s Big Screen @ Home series. The Storyteller Cinema 7 has reopened and will be showing a full schedule of films 7 days a week. Limit is 25 percent of capacity for each theater and masks will be required when not eating or drinking.
Covid: Another lockdown ‘last thing in world’ that government wants – BBC News
Louisiana lawmakers to debate parameters for sports betting – WBRZ