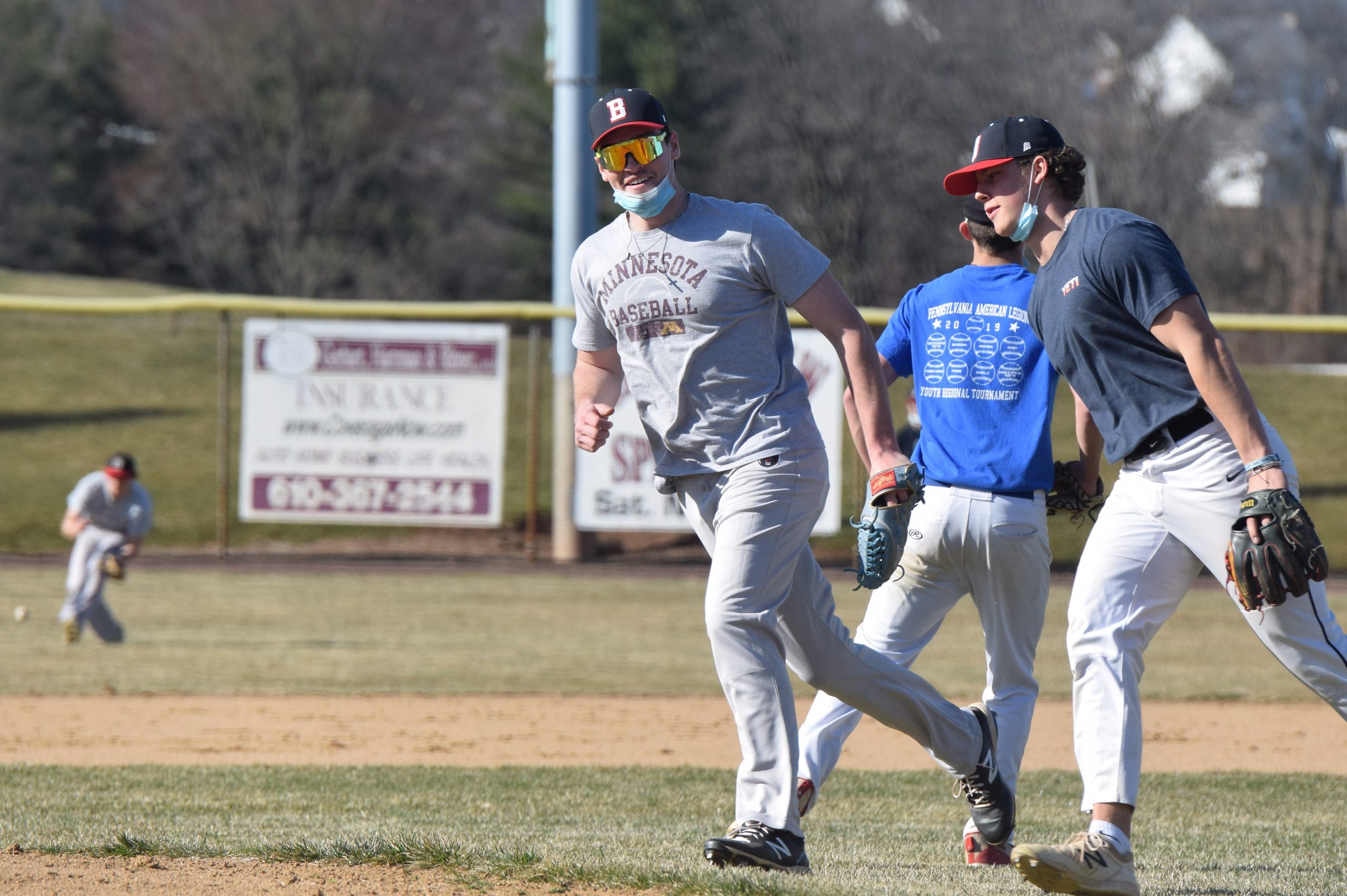 He said it was the type of excitement that’s typically reserved for a big game or tournament. This time, Rinda was simply headed to practice the next day.

Who could blame him and likely many other spring athletes who stirred in their beds Sunday night.

After an abrupt end to the 2020 season more than a year ago, Pioneer Athletic Conference teams officially took the field together for the first time Monday. Just as the 2020 spring sports seasons were about to kick off last March — practices underway and a scrimmage or two in the books for most squads — the COVID-19 pandemic ended them suddenly.

Schools halted practice and competition March 12, 2020 and the PIAA officially cancelled the remainder of its 2019-20 sports seasons on April 9, 2020.

“All of us were so disappointed to lose our season last year, but now it’s definitely exciting to be back,” Methacton senior softball player Olivia Terry said. “I think we’re all just really grateful to be able to play out our senior season.”

“For the first day of practice, it was exciting to get back into it,” teammate Caraline Newman added. “We all had the energy going from a season off because last year we were really looking forward to playing and how much talent and potential we had. It’s exciting to have it back this year.”

Like in the fall and winter, there are some changes for teams this spring due to COVID safety precautions — from wearing masks to limited locker room access and trying to maintain distance from each other when possible on the field.

Methacton softball softball coach Cathy Miller, now in what she’s calling her 39B season after her 39th season’s premature end in 2020, said it’s taking some getting used to things like pre-practice COVID screenings.

“(Last year) was weird and this year’s just as odd,” Miller said.

“Those kind of things have added a level of stress for me that I really don’t want to deal with, but you have to. We’re managing, but the kids are pretty resilient. They’re really excited, especially the senior group.” Monday was the date the PAC agreed to let teams officially begin their 2021 preseasons, which was two weeks after the PIAA opening date of March 8.

The first day track and field, boys’ volleyball, lacrosse, baseball and softball teams are allowed to return to competition is April 7 due to mandatory 15-day practice rules with boys tennis teams able to start matches sooner.

Teams have scrimmages scheduled as soon as next week.

“It’s been a long wait,” Rinda’s teammate Cooper Fiore said. “ We basically waited two years (for games), so everyone’s energy is up and ready to go for the season.”

“Everyone’s been locked up in their houses, especially some guys not being in school as well. It’s been hard on people just staying inside,” he added. “Without sports and school there’s not much to do to feel a part of something and come together, and be back as team,”

PAC schools will play league-only competition and will have the ability to schedule non-league contests after the completion of those schedules.

There won’t be a league postseason, but the PIAA announced Wednesday that it is attempting to expand the state playoff format from the district champion-only tournaments it used in seasons earlier this school year.

The delayed start to winter sports kept spring sports teams out of the gyms much longer this winter, part of the reason why the PAC chose to push back its start.

Pottsgrove’s players said they were limited to just a handful of voluntary workouts before taking the field earlier this week.

“It was weird seeing all the new faces the first day of practice, instead of the beginning of the year not seeing all the underclassmen,” teammate Avery Spencer said. “The first day was definitely interesting just learning names.” Only a few days in, the 2021 season is already flying by.

“In past years, it doesn’t feel like the season is really catching up on us,” Rinda said. “It feels like we can’t wait for it to start. This year we haven’t really been able to do a lot of offseason stuff. I told my dad, ‘I can’t believe that the season is starting,’ because we haven’t done anything as a team in the offseason.”

There were missed opportunities for both the Methacton and Spring-Ford programs last season.

The Warriors’ 2019 league season ended with a loss to Spring-Ford in the PAC title game and they had goals of meeting up with the Rams there again in 2020. Pottsgrove hoped to build off a 2019 District 1 playoff win that marked the first in school history.

Now two seasons removed, the goals haven’t changed much for either program but their perspectives have after watching friends and teammates unable to conclude their high school careers last year.

“Just being able to play, especially your senior year, just having it is something I’ve always thought of and kind of dreamt of playing with my friends one last time before we all go our separate ways,” Spencer said.

Finally back on the field, the spring athletes know nothing can be taken for granted.

“Everyone has been really flexible and great about just the circumstances that we’re under and working with the time that we have,” Terry said. “I think that we’re making the most of it and the time that we’re in school and practicing we’re really just giving it 100 percent.”

SBU Places Two Subjects in US News 2021 Global Top 100 – Stony Brook News
Home-schooling around the world: How have we coped? – BBC News