Sports Have Been a Shadow of Themselves Without Fans… 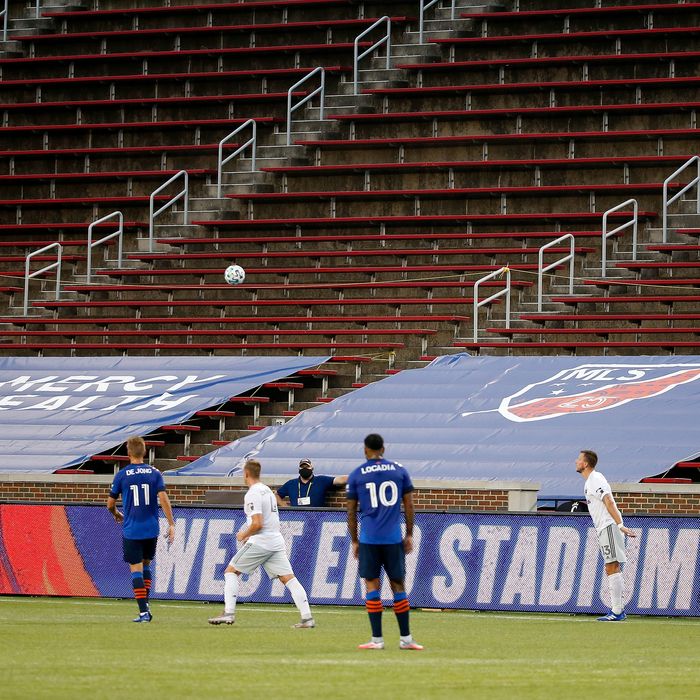 It’s just not quite the same. Photo: Kirk Irwin/Getty Images

Amid the upheaval the pandemic has brought to global sports over the past year, I’m not sure anything has been more surreal and disorienting than the lack of fans in attendance. The surface-level aspects of this change have been weird enough: the pumped-in crowd noise (which, when done poorly, can sound less like a full house of cheering fanatics and more like some sort of distant Satanic chant), the cardboard cut-outs, the ability to introduce one’s children to all sorts of on-field vulgarities that they can now pick up loud and clear on a TV broadcast. But I’d argue the bigger adjustment has been existential. If the Lakers and Celtics continue their decades-long rivalry, but in an empty arena, does it really count? What is the point of a “home game” with no fans? If there isn’t anyone drinking in the sunshine at Wrigley Field, why are baseball games happening there at all?

The pandemic has turned watching games on television into an exercise in collective delusion: If you zoned out and didn’t think too hard, you could almost convince yourself that everything was normal. Meanwhile, the players have often been lifeless, adrift, and bewildered; they’d played in front of a crowd — for a crowd — their entire lives and hadn’t ever considered the possibility of a time when they wouldn’t. American sports have continued this way for roughly eight months now, starting with the highly successful National Women’s Soccer League’s Challenge Cup in June and leading up to whatever college basketball game was supposed to happen tonight but ended up getting canceled — and it hasn’t stopped being weird. Fans are sports. That sports have continued without them is a sign of their short-term economic reliance on television. But nothing about this has felt right at all.

That, friends, is about to change. 2021 will be the year fans really come back. Yes, they’ve already been let into plenty of events, from the Super Bowl (which wasn’t nearly as crowded as you thought it was) to the World Series to college football and basketball games (I’ve attended a few of these myself) to even NBA games (the league instituted a highly successful bubble four months ago, but now, in some arenas, it lets fans get so close that they can get in a screaming match with LeBron James). But as with almost everything involving COVID-19 in this country, what’s allowed or forbidden is dependent on the preferences of state governments. Many East Coast teams — Yankees, your Knicks, your Red Sox, your Jets — are playing without spectators. In the South and parts of the Midwest, people have been able to attend games for months. Stadiums there mandate reduced capacity and socially distanced seating, but they’re still selling tickets.

We’re at a clear tipping point now, though. The Daytona 500 over the weekend felt like the first sign of what’s coming: The event allowed 30,000 fans — the most of any sporting event in North America since the pandemic began — and even let the traditional campers on the infield lawn. (They didn’t bring back last year’s grand marshal, though.) And while NASCAR has certainly taken the lead on all this, you can’t simply sit back and cluck your tongue at red states here: The Knicks and the Nets will both be allowing fans at their games, at 10 percent capacity, starting on February 23. (COVID tests will be required for entry, at least at first.) Major League Baseball had no fans in attendance during the regular season, but many teams, maybe even most teams, will be open for business come April: Even the Mets are already selling tickets.

Each event like the Daytona 500 is going to crack the window a little bit more, particularly as the vaccine rollout keeps accelerating and COVID cases keep falling. We’re going to see a packed house before you know it — probably before some of us are ready. We can argue about the danger of all this. Crowds at games have made me nervous all year, but it’s true that, even taking into account our country’s abysmal contact tracing, there have not been any on-record superspreader events at games in North America, and the CDC does not consider attending a sporting event a “highest risk” activity. In any case, it is happening. It is charging forward, and fast.

In the early days of the pandemic, I found myself daydreaming of a time in an indeterminate future when I’d be shoulder-to-shoulder with 100,000 screaming football fans, bonded with them even if we disagreed on everything else in the world — the kind of experience only sports can make happen. I figured when that happened, it would be the official sign that the pandemic was over, that we had made it through. We are not there yet. But sports wants us to think we’re close. And there will be many, many people who will run out to a game at the first opportunity, as a chance to see something new, to see something familiar, to regain what they have lost. It may be a while until your music festival reopens. But sports? They are ready to go. Whether we are ready for them or not.

Now, if John Oliver is right, we’re all just a couple flaps of a bat’s wings away from the next pandemic. But if it does turn out that 2020 is remembered as the year the fans vanished, it will be worth reflecting on just how empty sports has felt without them. The facsimile of a regular game has always felt like just that — a facsimile. The quality of play has fallen considerably. For evidence of the detrimental effects of a fanless reality, look no further than college basketball right now, where the exhaustion around COVID protocols, combined with the antiseptic environment of an empty arena, has led some teams to bail out of their seasons altogether. When teams, players, and leagues pay lip service to the fans, going on about how important they are, it always feels a little bit like capitalists thanking the consumers who pay their salaries. But now we can see, palpably see, that there’s actually much more to it than that.

Daily news about the politics, business, and technology shaping our world.
By submitting your email, you agree to our Terms and Privacy Notice and to receive email correspondence from us.
Covid: Dutch crisis as court orders end to Covid curfew – BBC News
In freezing US, Biden seeks to cool down politics – BBC News