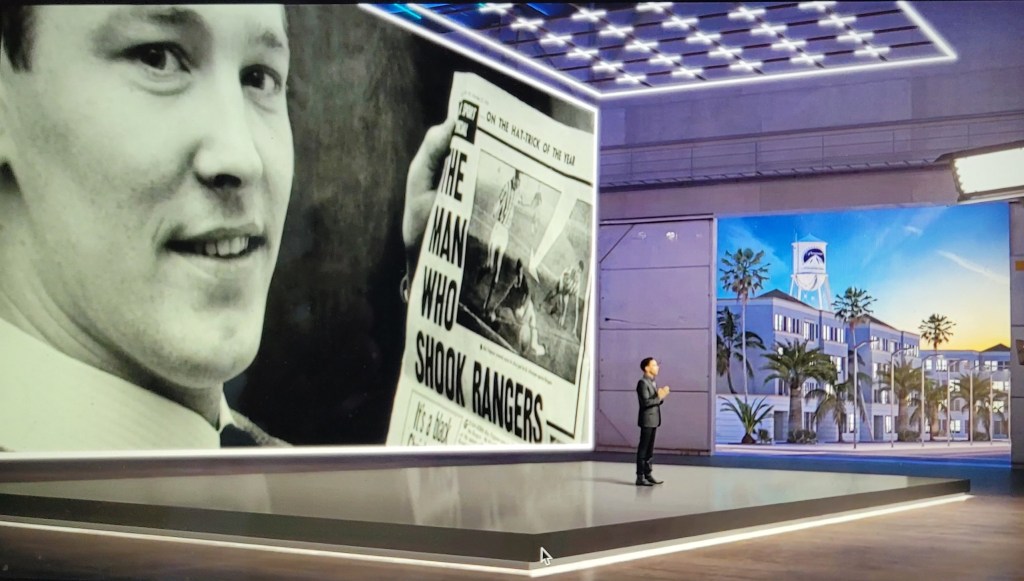 “Paramount+ will be the leader in live sports,” CBS Entertainment Group boss George Cheeks said today in a major streaming war throw down to the likes of Olympics and Premier League home Peacock.

Coming partway through a delayed, glitchy and often repetitive corporate presentation of the March 4 launching ViacomCBS platform, Cheeks promised a plethora of sports programming from the NFL, international soccer and more.

“Bottom line everything sports fans love on CBS …all of this will be available on Paramount+,” Cheeks declared after an intro from RuPaul. For most Stateside sports fans, the big ticket is the NFL, which is in pricey play as the TV renewal rights are on the table heading towards next month.

A reality the CBS exec acknowledged in what was perhaps a case of some public negotiating.

“It’s television’s most valuable property by far, attracting massive audiences and major advertisers and it will be fundamental to the growth of Paramount+,” Cheeks asserted. “It drives more subscriptions than any other program and significant engagement too.”

As a part of a subscriber strategy, Cheeks unveiled the move of Inside the NFL from its long time home on Showtime to Paramount_

Tossing into the touchdown zone, Cheeks brought the CBS Sports booth boys of Tony Romo and Jim Nantz in to back him up. “If you love sport, tell me this isn’t the best thing …the best thing out there,” said the former Dallas Cowboys quarterback.

But American football wasn’t the only kicker on Paramount+’s bench today. “We’re also doubling down on soccer on Paramount+,” Cheeks said in his virtual pitch. The thrust has greater significance as NBCUniversal is shuttering NBC Sports Network at the end of the year. The plan by the Comcast-owned media giant is move NBCSN’s Premier League coverage and more to USA Network and online to Peacock, who may or may not have an Olympics to show this summer.

“So, as we look to the future, we are making soccer a core pillar of sports, exclusively available on Paramount+,” Cheeks noted.

In a sliding tackle of response, the CBS Entertainment Group president and CEO detailed the deal the platform had inked to become the home of UEFA soccer in the USA. “We will be the home of UEFA, including the popular Champions League, Europa League and Europa Conference League and the only place in the U.S. where you can find every match, every season.” – as the streamer’s recent Super Bowl ad made clear:

In addition, Women’s World Cup champ Megan Rapinoe and more of the National Women’s Soccer League will be on Paramount+. Already picked up by Amazon and Universal in the UK, as Deadline exclusively reported last week, Paramount+ now has taken the US right to the soccer documentary Sir Alex Ferguson: Never Give In. Parallel to Paramount+’s big soccer coverage, there will be four to five Stories from the Beautiful Game docus from producer Pete Radovich.

As well, Paramount+ is hoping to snare more of the fast growing and demo rich American soccer crowd with access to more than 200 Concacaf matches, starting with the Concacaf Nations League Finals in June. There’s also 300 games from Argentina’s top tier Liga Profesional de Fútbol and 350 matches from Brazil’s Campeonato Brasileiro Série A in play too.

And yes, like Shari Redstone, Bob Bakish, ViacomCBS streaming chief Tom Ryan, Paramount Pictures’ Jim Gianopulos, Paramount+ EVP Julie McNamara and Paramount TV boss Nicole Clemens and everyone else who showed up today before and after him – Cheeks used “mountain” to describe the platform’s content.