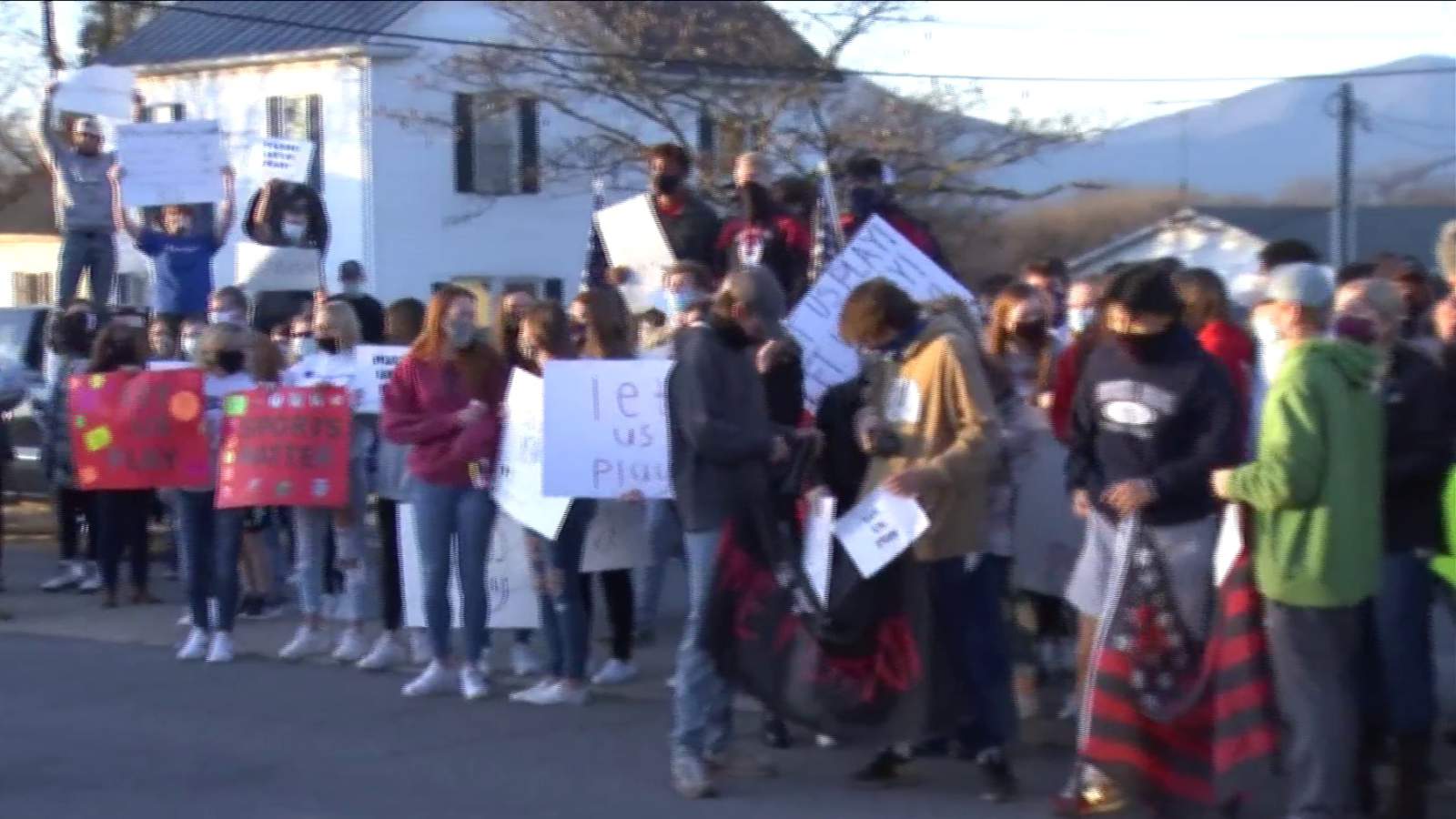 BEDFORD, VA. – Bedford County student-athletes will continue to sit on the sidelines of competition for now. This comes following the school board failing to get a majority to reverse its previous decision.

It was not the outcome that the more than 100 students who gathered for a rally before the meeting had hoped for. They were loud and proud, chanting ‘let us play’ and rallying for a policy change. The group included students like Staunton River High School senior Aiden Brown.

“A lot of kids, this is all they have, all they have is sports. So we want this community to come together and show the support for sports and let us play, that’s simply put,” Brown said.

It was the latest show of support in our area. In the last few months, the movement has swept the country, and local students have used the rallying cry in Roanoke and Montgomery counties.

Amy Loughlin is the mom of a senior student-athlete and organized the rally.

“We can send emails until we’re blue in the face, they end up in the trash. I’ve sent two this week with no response to all seven members, even the ones who are for sports, I’ve gotten no response,” Loughlin said. “This, this gets a response.”

After receiving an update from division staff on the current situation, the board held a lengthy, heated discussion about returning to athletic competition. There was no vote as four board members, a majority on the seven-person board, made it clear they did not support returning to competition at the current juncture.

Jason Johnson was named the new chairman Thursday night and is part of the majority against returning to sports for right now. He said despite divisions like Roanoke County, Botetourt and others recently reversing their decisions, they’re just not ready to do it in Bedford.

“Our numbers in Bedford County have only risen since our last meeting in December and we just want to make sure that we can continue operating our schools for in-person learning,” Johnson said.

The three board members who are in favor of resuming sports came out to cheer the crowd on. Students huddled around phones in the parking lot to watch the meeting stream, cheering and jeering along in real-time as if they were at a game in the student section.

Johnson said he hears the students and appreciates their enthusiasm, but for right now the board continues to look forward hopeful cases will drop.

“We just want to make sure that we can do everything we can to maintain in-person learning at our schools so that our students can continue to have that time with their teachers and their peers,” Johnson said. “And we can not wait to get them back on the field or the court or the track as soon as possible.”

The division’s mental health team is meeting with coaches and other school staff to get a game plan together to flesh out programs to help student-athletes struggling with not being able to compete.