US logs a record 2,804 coronavirus deaths in one day – The Guardian

US logs a record 2,804 coronavirus deaths in one… 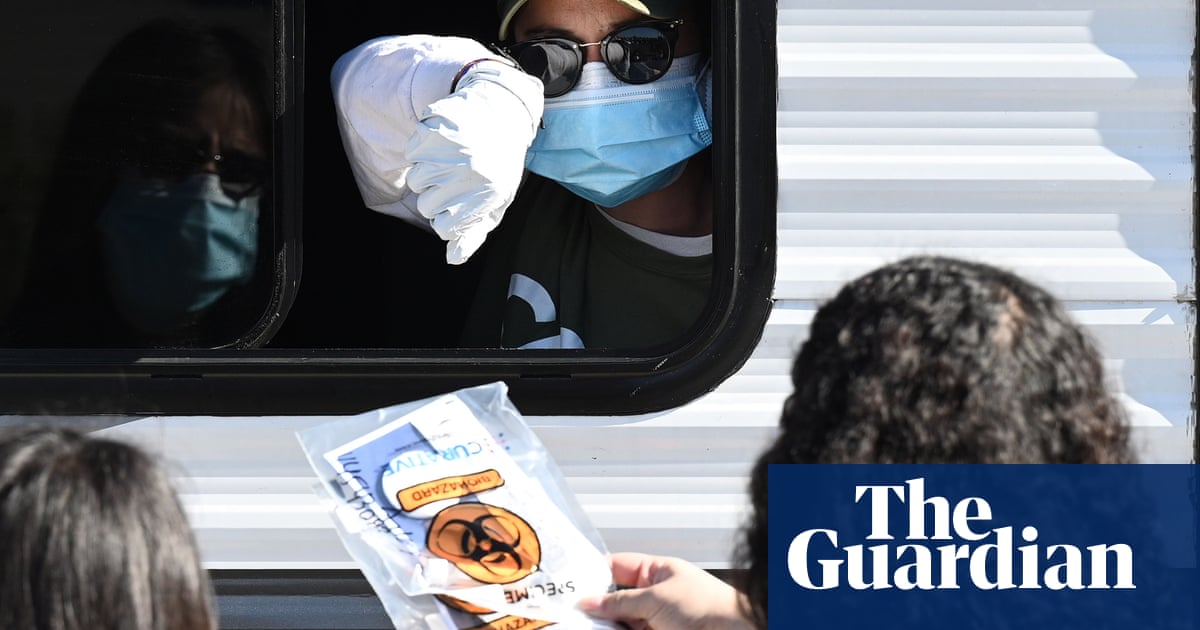 The US recorded its highest daily number of coronavirus deaths on Wednesday, as the number of people admitted to hospital with Covid exceeded 100,000 for the first time since the pandemic began.

According to the Johns Hopkins University tracker, 2,804 new deaths were recorded on Wednesday, nearly the number of people killed in the 9/11 terrorist attacks. The previous high was the 2,607 deaths recorded on 15 April, at the beginning of the pandemic. (Johns Hopkins had earlier reported 3,157 deaths on Wednesday, reportedly due to an error in one state.)

There were 200,070 new cases on Wednesday, only the second time that new cases had exceeded 200,000. With the total caseload now standing at 14,061,616, the US recorded its 14-millionth case on Thursday, and experts predict the death toll could reach nearly 450,000 by the end of February.

The deaths, cases and hospitalizations showed a country slipping deeper into crisis, with perhaps the worst yet to come, in part because of the delayed effects from Thanksgiving last week, when millions of Americans disregarded warnings to stay home and celebrate only with members of their household.

Across the US, the surge has swamped hospitals and left nurses and other healthcare workers shorthanded and burned out.

“The reality is December and January and February are going to be rough times. I actually believe they are going to be the most difficult time in the public health history of this nation,” Dr Robert Redfield, head of the Centers for Disease Control and Prevention, said on Wednesday.

Redfield said that about 90% of hospitals in the country were at stretched capacity.

“We are at a very critical time right now about being able to maintain the resilience of our healthcare system,” he said.

The grave total came as Joe Biden, the president-elect, threw his weight behind a bipartisan $908bn coronavirus relief effort in Congress which would provide $300 a week in federal unemployment benefits and direct $160bn to states and cities.

Hospital admissions grew over the course of November, setting new records nearly every day. The American Ambulance Association referred to a 911 emergency call system “at a breaking point”.

Governor Laura Kelly of Kansas said there were no staffed ICU beds in the south-west of the state, while in New Mexico, coronavirus patients were using 27% of hospital beds, which has left the state with just 16 intensive care beds left to spare.

In California alone, more than 8,000 people were being treated for coronavirus on Wednesday, after the state saw a record number of hospitalizations for the fourth day in a row.

Health authorities had warned that the numbers could fluctuate strongly before and after Thanksgiving, as they often do around holidays and weekends, when because of reporting delays, figures often drop, then rise sharply a few days later as state and local agencies catch up with the backlog.

The White House coronavirus taskforce coordinator, Dr Deborah Birx, urged Americans who had travelled over the recent holiday weekend to behave as though they had the virus.

“If you are under 40, you need to assume you became infected during the Thanksgiving period if you gathered beyond your immediate household. Most likely, you will not have symptoms; however, you are dangerous to others.”

April’s peak of cases and deaths was concentrated mostly in New York and New England, but the current spread of the virus is across the whole country, and shows no sign of slowing down. Over 1.1m new cases have been recorded in the last seven days alone, and 273,621 people have died in total.

Donald Trump’s few public appearances recently have been dedicated to efforts to overturn the results of the election rather than deal with coronavirus. Before the election, Trump said that the country was rounding the corner, and the media would no longer talk about Covid after the election.

The mayor of Los Angeles, the second largest city in the US, with a population of 3.9 million, warned it was nearing a “devastating tipping point” this week, as officials introduced new guidance prohibiting mingling of households.

“It’s time to hunker down,” Eric Garcetti said. “It’s time to cancel everything. And if it isn’t essential, don’t do it.”

Los Angeles county, which includes Los Angeles and surrounding areas, is home to 10 million people and has recorded 414,185 infections so far. So far 7,740 people have died.

Some coronavirus relief programs passed by Congress are due to expire at the end of the year. Twelve million people are due to lose unemployment benefits as Democrats and Republicans remain at an impasse over the size of a new relief package.

The Democratic-controlled House of Representatives passed a stimulus bill worth $3tn in May and has pushed for a more than $2tn measure in recent weeks, but have dropped their demands to a $908bn bill, which Biden said on Wednesday he would support.

Mitch McConnell, the Republican leader of the Senate, supported a $1tn bill in the summer but abandoned that after criticism from conservatives. McConnell has since been fixed on a $550bn bill, which has twice failed in the Senate.

The vice-president, Mike Pence, who has been leading the Trump administration response to the pandemic, will participate in a coronavirus response roundtable in Memphis on Thursday.

The latest on the coronavirus pandemic and vaccines: Live updates – CNN
The Nach on Sports – Flathead Beacon

Why whales in Alaska have…