More Americans than ever hospitalised with Covid ahead of… 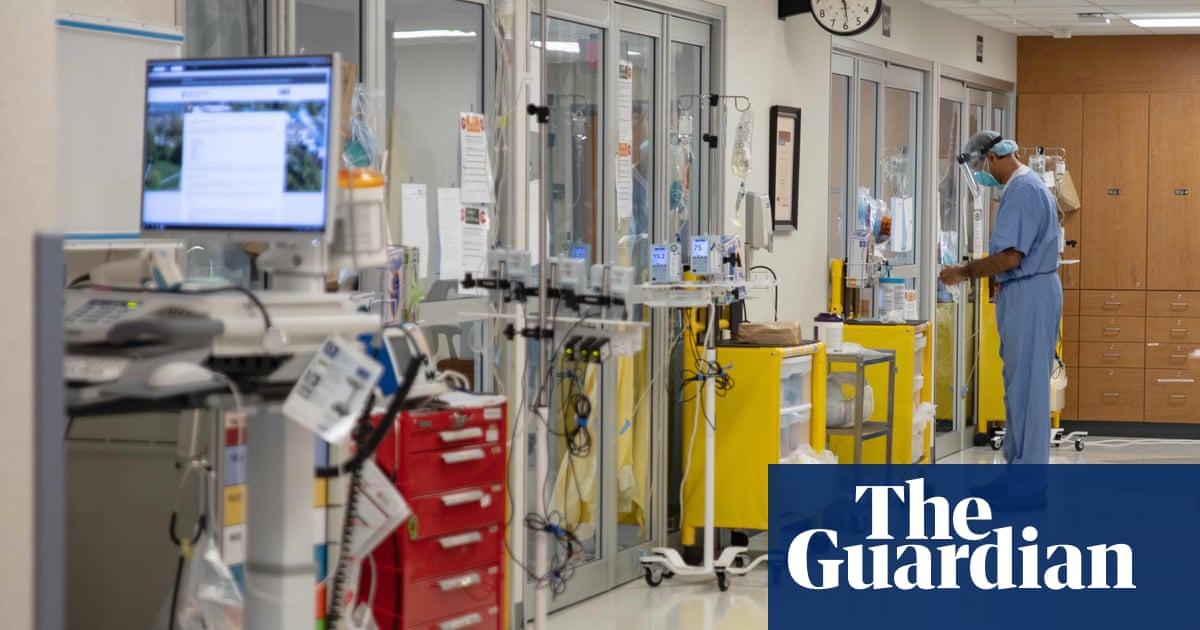 More people are hospitalised with Covid-19 in the US than ever before, as cases continue to rise steeply amid the countdown to a Thanksgiving holiday many fear will have disastrous effect, given mass travel and indoor family gatherings.

On Friday, 1,448 people died – the equivalent of one death every minute.

In Washington, Donald Trump has faced criticism for a lack of action. The lame duck president played golf on Sunday. On Monday he had no events on his public schedule.

In Wilmington, Delaware, where Joe Biden continues to plan for the transition of power, the president-elect was due to hold a virtual meeting with the US Conference of Mayors. Biden spoke to governors last week.

Despite news of impending vaccines, states across the US are feeling the strain. In just one example, Minnesota, the Minneapolis Star-Tribune’s front-page headline on Monday was: “No beds anywhere: hospitals strained to limit by virus.” The paper reported 7,219 new cases and 41 deaths and said demand for testing was surging.

Resources are also strained in states which saw early peaks and are now experiencing a resurgence. In New York, where schools are closed again, the Wall Street Journal reported that hundreds of bodies from the spring surge were still in refrigerated morgues on the Brooklyn waterfront.

Citing the city’s medical examiner, the Journal said many of the bodies “are of people whose families can’t be located or can’t afford a proper burial”. Mayor Bill de Blasio ruled out mass burials after controversy early in the pandemic.

In Nevada, the Democratic governor, Steve Sisolak, having tested positive himself earlier this month, announced new restrictions on casinos, restaurants and bars and other public venues, while imposing a broader mask mandate.

“Whether you believe in the science of Covid or not,” he said, “the reality is this – Covid is filling up our hospital beds, and that threatens all Nevadans.”

Oregon also reported a record high in new cases on Sunday, 1,517, bringing the total to 65,170. The death toll reached 820. The director of the state health department urged residents to cancel indoor Thanksgiving plans and those that involve large groups.

Millions bought tickets to fly for Thanksgiving before the Centers for Disease Control and Prevention (CDC), the top US public health agency, advised against holiday travel. Many are still crowding airports and boarding planes, despite relatively lenient cancellation policies among major airlines.

“Consumers should feel comfortable changing their plans and canceling their flights if they need to for health reasons,” John Breyault of the National Consumers League told the Associated Press.

More than 2 million people were screened at US airports on Friday and Saturday, according to the Transportation Security Administration (TSA). That was far lower than during the same period in 2019 but Friday was only the second time since mid-March that daily airport screenings passed 1 million.

On Monday, the TSA said it screened 1.047 million passengers on Sunday, the highest number since mid-March.

The CDC has said Americans should skip Thanksgiving travel and not spend the holiday with people outside their household. The nation’s top infectious diseases expert, Dr Anthony Fauci, said on Sunday he was worried crowding at airports could worsen an already perilous situation.

People at airports “are going to get us into even more trouble than we’re in right now”, Fauci told CBS. He also said new Covid cases from Thanksgiving would not become evident until weeks later, making for a “very difficult” situation as the country heads into colder weather and the December holiday season.

Airlines have said they are sanitising gates and kiosks, shortening lines and gatherings and purifying air. Most are offering opportunities to travel later, though a replacement flight might cost more.

Coronavirus map of the US: latest cases state by state

The TSA said it had prepared for higher traffic, increasing staff to keep lines shorter and maintain social distancing.

“We have been handling passenger volumes reaching more than 900,000 a day frequently since early October,” the agency said.

Speaking to the Washington Post on Monday afternoon, Fauci said the news that two high-efficacy vaccines should be available to high-priority groups in December should encourage people to stay home and heed public health guidance over the holiday season.

“It should be an incentive for people,” he said, “despite the fact we all have Covid fatigue … because if help is on the way, you want to hang in there, not get infected, not infect your loved ones, because there is help that is close by and it’ll be getting better and better as months go by.”

Covid-19: Oxford University vaccine is highly effective – BBC News
Crowds of up to 4,000 and grassroots sport to return after English lockdown – The Guardian