With headlines like “God Bless America”, powerful media outlets around the world welcomed the defeat of Donald Trump but warned that president-elect Joe Biden faced enormous challenges in healing the US.

The international press also focused on the feat of Kamala Harris, Biden’s running mate, who will become the first woman of colour to be US vice president.

The Observer went with “It’s Joe”, while the Sunday Telegraph said “It’s time for America to heal” above a picture of Biden.

The Sunday Times used a picture of a celebrating black woman draped in the US flag and the headline: “Sleepy Joe wakes up America”, taunting Trump by using the derogatory nickname he had used for Biden.

Germany’s mass-market Bild newspaper carried a photo of Trump with a headline: “Exit without dignity”. 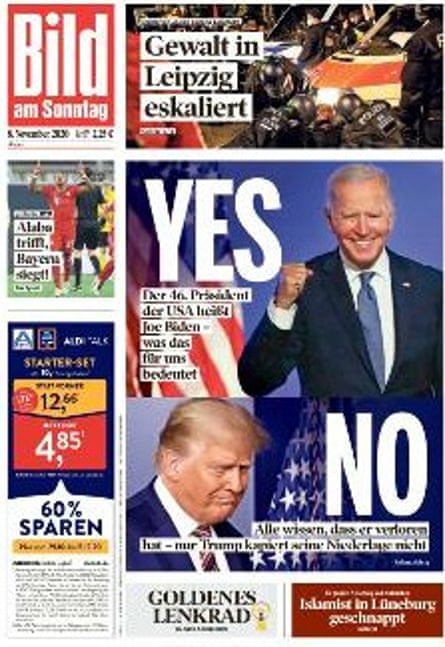 “What a liberation, what a relief,” reported Germany’s left-leaning Suddeutsche Zeitung broadsheet.

But it noted that Biden “inherits a heavy burden” like nothing faced by his predecessors, and warned that Trump accepting defeat was “unthinkable”.

While America’s paper of record, the New York Times, played it straight with a headline of “Biden beats Trump”, Australian tabloid the Daily Telegraph, owned by Rupert Murdoch’s media empire, also focused on Trump’s expected defiance and described him as a “hotball of fury”.

“(Trump) will simply not accept the humiliation of seemingly being beaten by a foe he perceived to be feeble and barely worth turning up to fight,” it said.

Brazil’s leading media outlets reported Trump’s defeat in the context of its own populist leader, Jair Bolsonaro, who has similarly sought to diminish democratic institutions and reject science-based facts.

“Trump’s defeat punishes the attacks against civilisation, it is a lesson for Bolsonaro,” wrote Folha de Sao Paulo, one of Brazil’s major daily newspapers.

“May Brazil’s leaders seize the spirit of the times – or die, like Trump, who has already left it too late.”

Spain’s centre-right El Mundo newspaper said Biden’s win was a goodbye to Trump’s populism, and described Harris as a “symbol of renewal”. 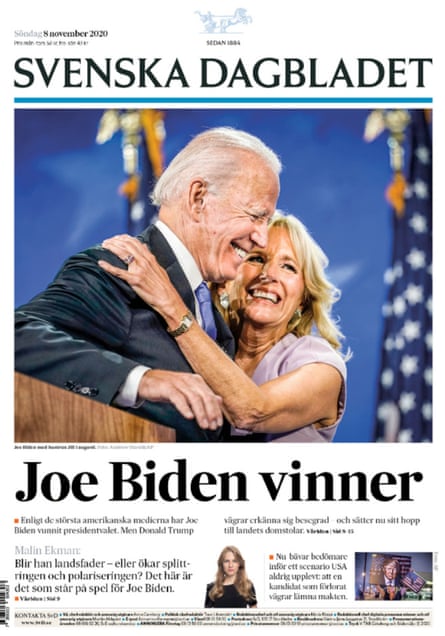 It described Biden’s vow of a return to normalcy as “mission impossible”.

“The election result shows a deeply divided country, and it will be difficult for Biden to carry out the reform programme he has promised his core voters,” the paper wrote.

Sweden’s conservative Svenska Dagbladet daily warned of the dangers posed by the many millions of Americans who will continue to believe Trump’s dangerous rhetoric that the election had been stolen from him.

“Election is over – but conflict continues,” read its headline.

“Half the country – half of those who voted at least – may have a lingering feeling that something is very wrong after months of battles and voices calling the election itself into question. That the election system itself is rigged and can’t be trusted.”

On a lighter note, the Ayrshire Daily News, whose patch covers the Trump Turnberry golf course in Scotland, took a more local look at the result.

Why whales in Alaska have…