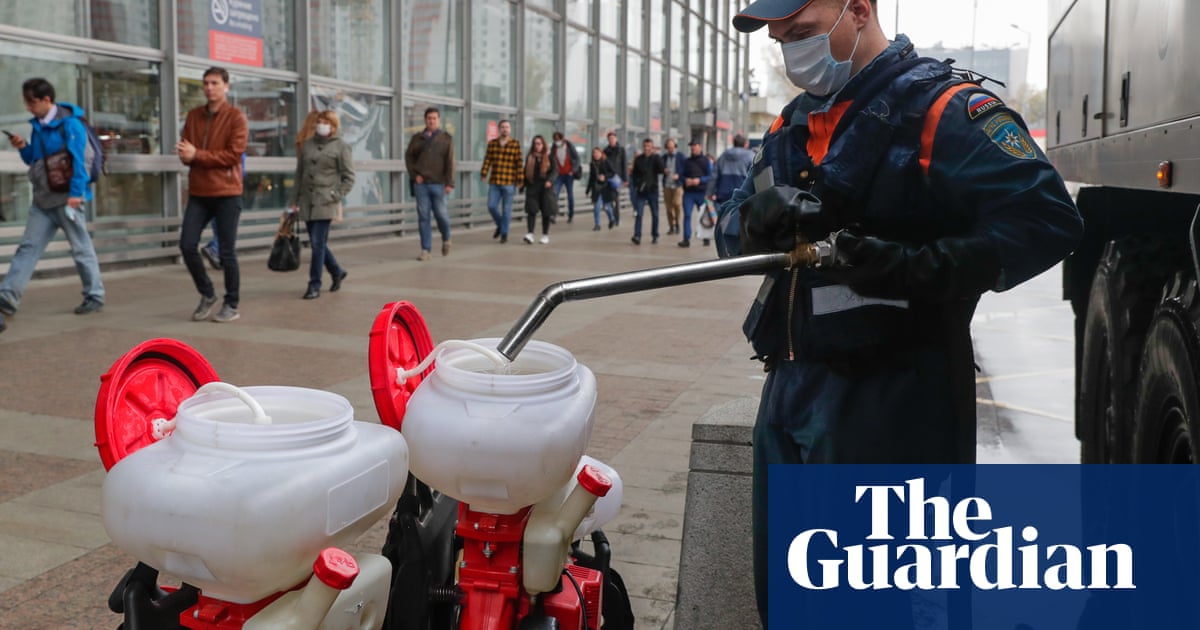 Russia has recorded its highest day of fatalities and infections since the coronavirus pandemic began this year, amid concern that hospitalisations and deaths are increasing rapidly as cases of infections surge in many places around the world.

The Russian figures emerged as the World Health Organization reported a 34% increase in infections across the European region, including Russia, accounting for 700,000 cases in the past week.

Even as Russia pushed forward with testing a second vaccine candidate against Covid-19, the official Russian coronavirus taskforce said on Tuesday the country had recorded record increases of 13,868 cases and 244 deaths in the last 24 hours. Russia has recorded 22,966 fatalities since the start of the pandemic.

The country’s previous highest number of fatalities stood at 232 people on 29 May.

With 1,326,178 cases overall, the country of about 145 million has the fourth highest number of infections in the world, behind the US, India and Brazil.

With the much-predicted autumn and winter resurgence in coronavirus infections already well under way, countries across the globe – from Iran to Argentina – reported increasingly strong growth in transmission as already economically battered governments planned their next steps.

Iran’s novel coronavirus death toll rose by 254 to 29,070, the health ministry said on Tuesday, as the number of confirmed cases increased to 508,389 in the hardest-hit Middle Eastern country.

While the WHO’s weekly epidemiological report showed global cases relatively stable for the past three weeks , it says the overall picture hides alarming rises in a number of countries and regions, not least in Europe where the second wave is exceeding previous peaks although some of that is due to increased testing.

Governments across Europe are ratcheting up restrictions in an effort to contain the spread of the coronavirus as the continent recorded its highest weekly number of new infections since the start of the pandemic.

On Tuesday there were more than 1,600 people in intensive care for the disease in France for the first time since 25 May, and the death toll rose by 117 over 24 hours.

The prime minister, Jean Castex, has refused to rule out local lockdowns. “Nothing should be off the table when you see the situation facing our hospitals,” he said.

Paris, Marseille and seven other cities have been placed under maximum virus alert, resulting in the closure of bars, gyms and swimming pools. Public parties are banned and restaurants have to ensure a minimum 1-metre (3ft) distance between tables, with groups of diners limited to six people.

The Dutch prime minister Mark Rutte said the Netherlands must return to a partial lockdown, including the closure of bars and restaurants. “Today we are announcing new and weighty measures,” Rutte said in a nationally televised news conference at which he announced that bars and restaurants will be closed excepting for takeaway or delivery. Alcohol sales in the evening will also be banned. The measures will go into effect on Wednesday for a period of two weeks.

Italy also toughened its measures for the second time in a week – imposing new restrictions on gatherings, restaurants, sports and school activities – though overall the measures remain less severe than in other European countries where infection rates are far higher.

Poland’s prime minister, Mateusz Morawiecki, urged the country’s citizens to observe social distancing, wear masks and disinfect hands and spaces, as he himself went into quarantine following contact with someone who later tested positive for Covid-19.

Another regional centre for concern for the WHO continues to be the Americas. Despite the continued efforts by the US president, Donald Trump, ahead of the presidential election on 3 November, to diminish the impact of coronavirus, the US continues to have about 300,000 new cases a week with declines observed during July and August “stagnating” in recent weeks and several states reporting sharp rises.