A new nationwide lockdown in France prompts an exodus from Paris, and other news from Europe. – The New York Times

A new nationwide lockdown in France prompts an exodus… 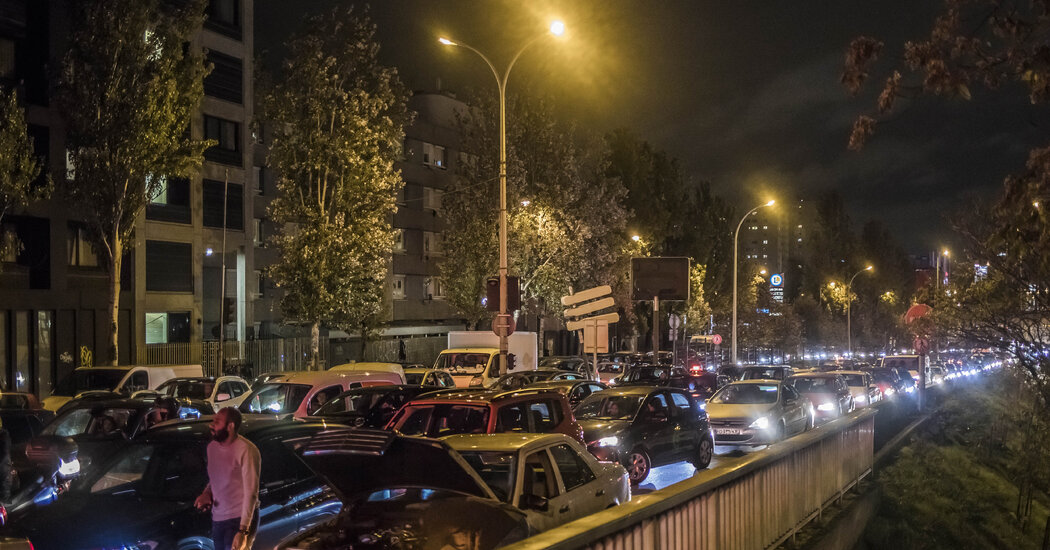 Thousands of people left Paris on Thursday, just hours before France went into its second nationwide lockdown, clogging the city with massive traffic jams as many sought to be confined in the countryside and less crowded areas.

Incredible traffic jam in Paris as people try to leave the city before 9 pm curfew and before confinement begins at midnight. Traffic is barely moving in every direction as far as the eye can see. Lots of honking and frustrated drivers. pic.twitter.com/6Zn2HCxuPl

Lines of cars stretched across hundreds of miles in the city and on the Boulevard Périphérique, the multilane ring road that circles around Paris, in scenes reminiscent of an exodus in the spring, when France imposed its first lockdown.

In March, 1.2 million people left the Paris area, nearly a fifth of its population. In some areas, the massive exodus by affluent city dwellers who decamped to their second homes helped spread the coronavirus to regions that at that point had been spared by the pandemic.

This time, the virus is spreading fast throughout the country, according to authorities. France has recorded an average of 40,000 new cases a day over the past week, one of the highest levels in the world. More than 2,500 new patients have been hospitalized daily in the past several days, the highest numbers since mid-April.

The new restrictions, which went into effect on Friday, require people to stay at home except for essential work or medical reasons. Restaurants and businesses are closed, but schools remain open.

President Emmanuel Macron predicted earlier this week that the second wave of the virus would be more deadly than the first.

“I know the weariness and this feeling of a day with no end that is overcoming all of us,” Mr. Macron said as he announced the second lockdown on Wednesday. “This period is hard precisely because it is testing our resilience and our unity.”

Elsewhere in Paris this week, one of the world’s most iconic bookshops, Shakespeare & Company, said that sales were down almost 80 percent since March. “Like many independent businesses, we are struggling, trying to see a way forward during this time when we’ve been operating at a loss,” the bookshop wrote in its newsletter. The first iteration of the Parisian institution opened in 1919.

On Thursday, the organization that hands out the Goncourt Prize, France’s most prestigious literary award, announced that it will be postponed, in solidarity with bookstores closed by the virus rules. Goncourt winners are automatic best-sellers, and the organization said it didn’t want e-commerce platforms like Amazon to be the sole beneficiaries of the windfall.

Here are some other developments from Europe: